Well, almost anyways. This past week was the easiest week of teaching ever considering my teaching hours went from 21 to 10. The senior classes finished at the beginning of June so all i have left are 2 10th grade and 2 11th grade classes. The class periods were quite entertaining and as usual, a little too loud at some points since we were working in groups and competing. I had the students do a teamwork activity that I got from another volunteer that required them to build the tallest tower they could out of spaghetti and gum (yeah kinda gross but, asta e) while only speaking in English. It was really amusing to hear them trying to communicate if they didn’t know a specific word. 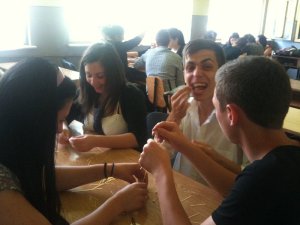 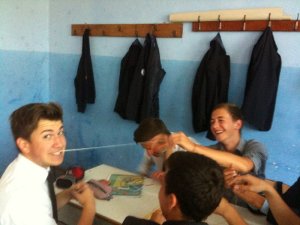 This week and weekend felt like it lasted so long because I did so many things. Wednesday, I along with a few other friends/teachers celebrated a fellow teachers birthday. Thursday I attended the opening of the new exhibit at the art museum and Friday I worked at school all day for the train the trainers conference and then played some very exhausting games of tennis. This was followed by a quick shower and then I headed back out to the folklore dance practice to hang out there. It was good hanging out with those students that are part of the ensemble and the older members as well that I don’t get to see very much because they are away at college. They are all awesome and so much fun.

Saturday morning was slow paced and relaxing which was nice and this was the day that I finally settled on an apartment which I will be moving into the weekend of the 28th. Aka when I have a bunch of people in town so they can help me move as well :). My next order of business is to start packing up my apartment here and I am not looking forward to that whatsoever.

Sunday I was woken up by a drunken phone call by none other than Danijela and Stefi because their cabbie was Romanian. Naturally, they put him on the phone to speak to me and we had a nice little chat. This is not the first time this has happened… After finally rolling out of bed, I headed on an easy hike with Loredana and Teo. We headed over the hills to the “suburb” of the city if you will which even with all of our stops to pick flowers, took no more than 2 hours.

When we got back into town, I went home to get ready and then headed back out to watch the finals of “Somesani Sunt Talentati” aka Somes(the valley that I live in) has talent. It was a local version of Romania’s got talent and the winners were awarded a pretty penny. The winners ended up being the Jokers. If you recall, they are the school’s street dance group that is made up of my students and they did an awesome job!

On a random note, my gas tank for my stove is empty. I was in the middle of cooking dinner last night and it just gave up and so did I. I said Eff this and just left the food how it was and was so stubborn that I refused to eat anything else. I am here for 3 more days before I leave for a while and then when I come back I will have to move so I am refusing to buy a new tank until I move into the new apartment. Looks like i’ll be eating a lot of sandwiches for the remainder of my time here.

This week will be filled with just a whole lot of packing, trying to not die of heat exhaustion, and getting ready for Darcy and Joanna’s visit. I am heading down to Bucharest for a doctor’s appointment at the end of the week and then I will be spending the weekend with my gazda family in Targoviste where I will get to see Denisa, my gazda sister that has been in England all year at college. From there I will head to pick up the girls in Budapest and then our adventure will begin.